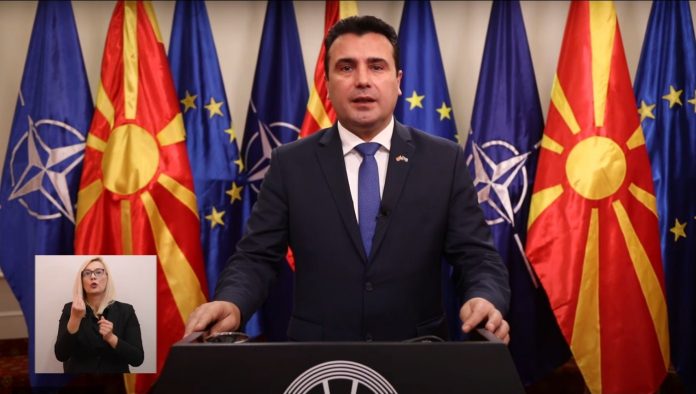 Macedonian Prime Minister gave a video address as a response to Bulgaria’s decision to veto the start of ascension talks between Macedonia and the EU.

Zaev’s speech was defined by the surprising break from his previous consolidatory rhetoric aimed at the local disappointed supporter base. In addressing Bulgaria, its politicians and their condescending remarks, Zaev has been condoning, overly diplomatic and even hopeful that Boyko Borissov’s government will change it’s course and allow the start of the EU talks.

The speech reflected Zaev’s feeling of disappointment in the EU and conveyed a rhetorical vengefulness towards Bulgaria.

Zaev called the veto an “irresponsible and heavy geo-strategic mistake” and a “bitter news for our nation,” adding that Macedonia’s neighbor had broken the “Good Neighbors Agreement in a gesture that shows neither friendliness nor brotherhood.”

On many occasions, Zoran Zaev stated that he and the Bulgarian Prime Minister Boyko Borissov are “like brothers.”

“Bulgaria’s position is totally irrational and insulting to the Macedonians and our entire people. It isn’t in the European or democratic spirit of the 21 century to tell another nation how it should feel and determine itself. It is not a European gesture for you to write the history of another people, to push for changes in its identity and to demand that this people must accept all of that.”

Zaev said that the Macedonian people are “clean in front of themselves and in front of the world,” in reference to the fact that Macedonians have always been on the defense against attacks and occupation by neighboring countries, or were forcefully recruited in their armies, but have never launched a military conquest or a hostile incursion in another country.

He added that the red lines regarding the language and identity are known to all and that these can’t be the subject of negotiations. Zaev’s bold statements may have dispelled previous accusations by the opposition, but only for the moment because VMRO’s leader Hristijan Mitskovski stated in a TV program that Bulgarian PM Borissov told him that “Zaev had promised everything that they [Bulgaria] are now asking from him.”

The country’s hopes for a near-term European perspective are on pause for now. Germany’s avowed support for Macedonian EU integration can remain until the end of December, when its Presidency of the EU Council come to an end.

As the current government reached the 100 days in power milestone since the 2020 elections, the pressure on the coalition is mounting. The opposition is pointing to the failing economy, the poor handling of the COVID pandemic and the fact that Zaev had promised a date for negotiations with the EU but failed.