Greece presses on name use and removal of Macedonian national symbol 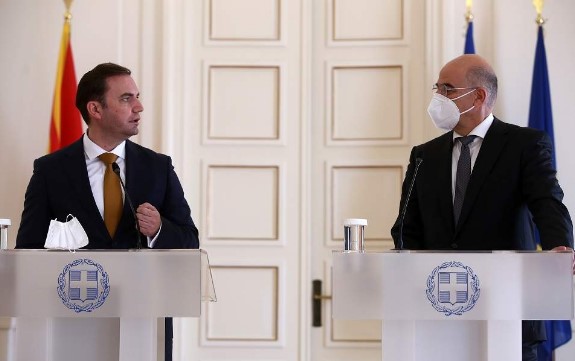 During his working visit to Greece, Macedonian foreign minister Bujar Osmani had meetings with his counterpart Nikos Dendias, President Katerina Sakellaropoulou and Prime Minister Kyriakos Mitsotakis. Osmani brings home reproaches for the incomplete implementation of the Prespa Agreement and three memoranda of cooperation.

Greece’s foreign minister Denidas has stressed that the Macedonian government needs to fully implement the removal of the Macedonian sixteen-rayed sun symbol from all public spaces, rename streets named after Ancient Macedonian figures and ensure Macedonian websites use the reference “North”.

According to the deal that was ratified in parliament by the SDSM-DUI government, the name Macedonia can not be used in publications and media supported by money from the state budget. This means authors of books, magazines, art, film, music and theater plays must use the imposed name “North Macedonia” when referring to the country.

Denidas was eager to emphasize the line that was drawn by the Prespa Agreement by telling Osmani that his compatriots have agreed that their ancestors did not go to war for Alexander the Great. Macedonian media reports that Osmani did not reply to the remark but stated that the government will respect the said Agreement.

Greece used the opportunity to extend the message that it has “a substantial vested interest” in keeping the Western Balkans region out of the reach of “other non-European forces” whom he said have “imperial aspirations” rooted in the past, unambiguously referring to Erdogan’s Turkey.