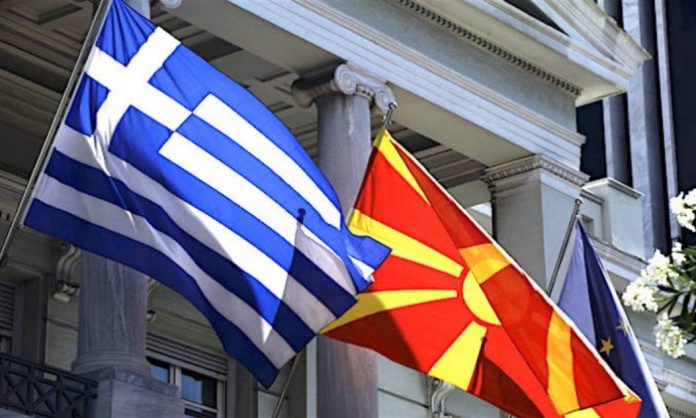 The Macedonians in Greece want to study in their native language, demands the organization Krste Misirkov which advocates for a stop to the decades-long persecution and discrimination at the hands of the state and radical groups.

In order to counter the damage done to the right to cultural autonomy for the Macedonians, the organization calls for the inclusion of Macedonian language classes in the public education system.

A letter that was published by the organization underscores the legal obligation by the Greek state to enable minority groups to exercise cultural autonomy without fearing repercussions.

Macedonia Times shares a translation of the letter in full.

In accordance with the Treaty of Sevres, signed in 1920 between Greece and an alliance between Great Britain, France, Italy and Japan, Greece became obliged to undertake measures for protecting the minorities living in its borders. The Treaty of Sevres was ratified through a legal act on 29 September 1923 and was published in the legislative gazette on 30 October 1923 (gazette 311, No 1).

Part of the obligations that are to be undertaken by Greece according to the Treaty is to forbid any kind of restriction on the freedom of using languages other than Greek by citizens of the Greek state; furthermore, the Treaty stipulates that the state needs to facilitate the use of any other language in court proceedings, orally or on paper (Article 7); and facilitate the learning of other languages in addition to Greek in the public school system (Article 9).

The responsibilities stipulated by the articles above have not been fulfilled by the Greek state. On the contrary, the state has been conducting a systemic policy of excluding minorities from being able to learn their native languages.

Furthermore, since the ratification of the Lisbon Convention in 2009, the Charter of Basic Rights of the European Union legally binds EU institutions and national governments to respect the linguistic diversity in the countries, through Article 22, and to prevent discrimination based on language, according to Article 21.

The Krste Misirkov organization condemns the unacceptable behavior by the government of the Edessa Municipality for systemically violating the legal responsibilities from above; the municipal government adheres to an objectionable practice of apartheid regarding groups of people who express a cultural or linguistic diversity, specifically in respect to the Macedonians who are native to the Edessa region.

A petition to the Municipality of Edessa on 19 September 2019 for the provision of a single classroom in the public school, for a specific period of time, towards organizing classes for the learning of the Macedonian language by the Krste Misirkov organization whose program undertakes the objective of promoting and studying of the language by citizens who speak it as their mother tongue, but also by any individual who wants to learn Macedonian as a second or third language – was rejected without providing any reasons.

By rejecting the petition, the municipal government did not take into account the legal obligations of the state. The Krste Misirkov organization is obliged to begin a legal battle in the courts of Greece and possibly at the EU level, demanding that the laws are respected. In the meantime, classes for the learning of the Macedonian language are held on private premises and with a very limited number of hours and students.

Violations of the laws are not committed against our organization only but impact other associations as well. THe Municipal Government of Edessa had decided to forbid the holding of cultural programs for Christmas, New Years eve, the local carnival, and so on – all of the local cultural associations for the affirmation of the local customs of the Macedonians in this part of Greece, and who speak the Macedonian language in its local dialect, have been adversely impacted by the decision.

Macedonian associations have resorted to utilizing private premises for the hosting of celebrations and cultural activities while all other associations receive support from the municipality by a variety of means. The main goal of hte Mayor of Edessa is to forbid completely Macedonian celebrations by implementing restrictive practices that remind of those used by previous regimes in Greece which persecuted Macedonians and committed a cultural genocide, especially in the city centers of the administrative region Macedonia.

The case of the association “Home of the Macedonian Culture” that was brought to the European Court for Human Rights 30 years ago has not resulted in Greece formally recognizing this association, despite the verdicts.

Contrary to this, a new Macedonian association “Brotherhood of native Sereians – Saints Cyril and Methodius” which was legally entered by the Court of Sintiki in the month of December 2017, the Primary Court of Seress decided to formally dismiss (decision No 185/2019) with the explanation that the use of the term “dopios” (local, natives) refers to all Greek citizens of the city Seress and not only the members of a single association. 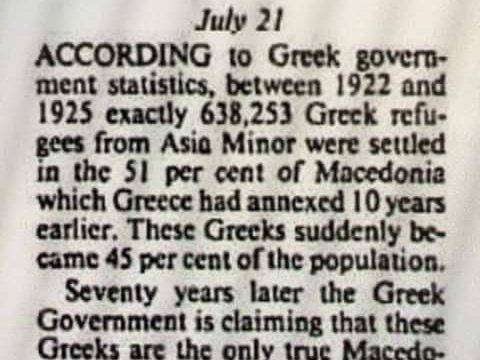 It has been long decades, since 1925, that the term Macedonian and its definition was forbidden from being used by Macedonians that have inhabited these lands in the Aegean part of Macedonia – therefore, the term “dopii” or “natives” has been applied by the Greek government itlsef to distinguish the Macedonians from the Greeks who arrived into Macedonia from Turkey, following the Treaty of Lausanne in 1923 which resulted in a population exchange between Greece and Turkey.

Therefore, those who “baptised” the Macedonians decades ago as natives or locals (dopias) and their language as “dopian”, have decided by a legal proceeding to forbid the use of the name “native” or “local” by the association, while also forbidding the use of the adjective “Macedonian”.

The conditions surrounding the discrimination against a part of the population of Greece that wants to preserve its traditions, customs and language, needs to end immediately, together with the violation of state laws by arbitrary and racist decisions from the municipal governments. This behavior is very similar to that of apartheid regimes and can only invite problems in the local municipalities. This behavior does not reflect the principles of any democratic state that pretends to respect the laws and values of the European Union.

Below, facsimile of official document in which the Australian naturalization authority forbids Krist Kostoff from declaring a Macedonian nationality. 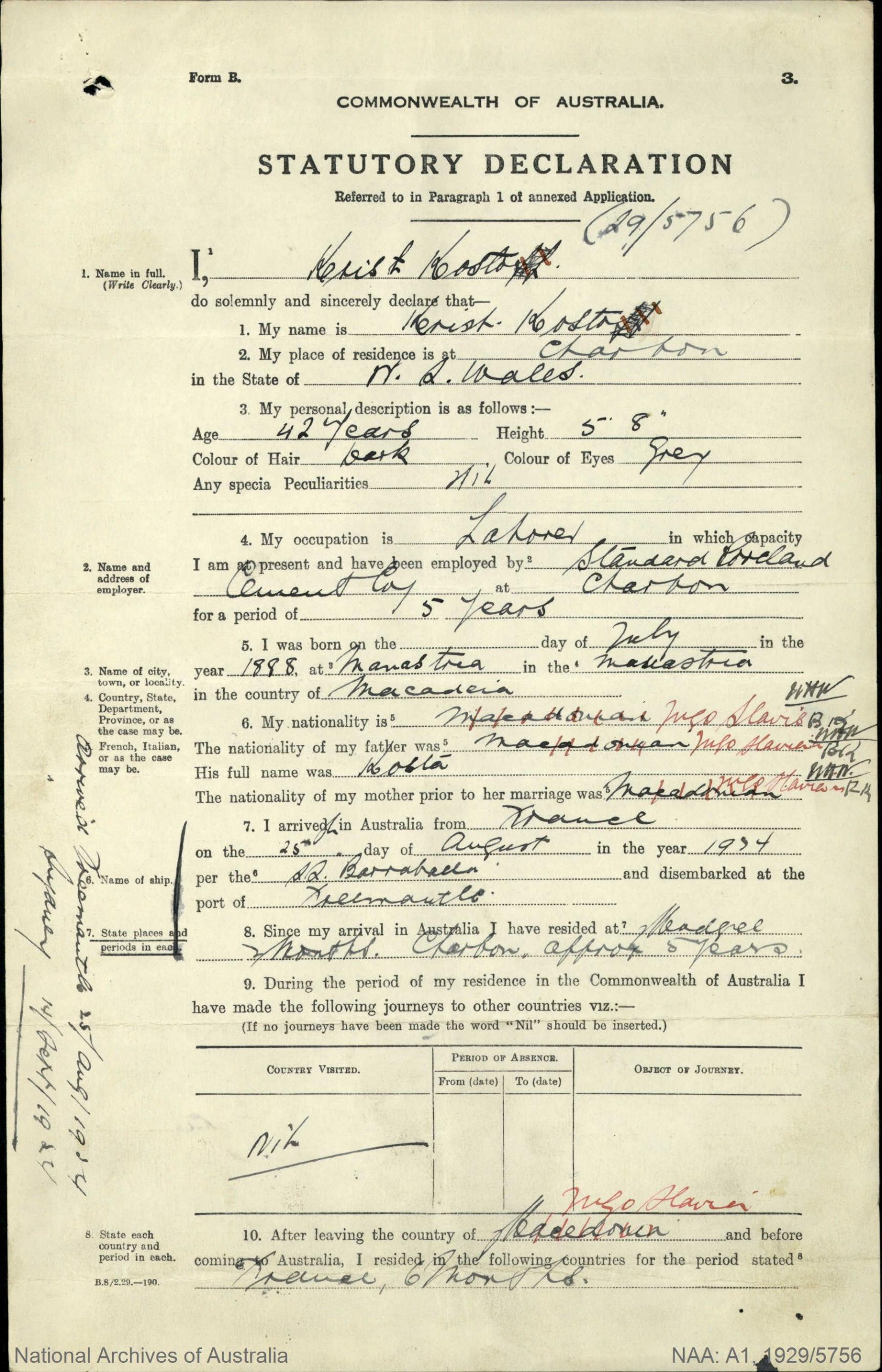 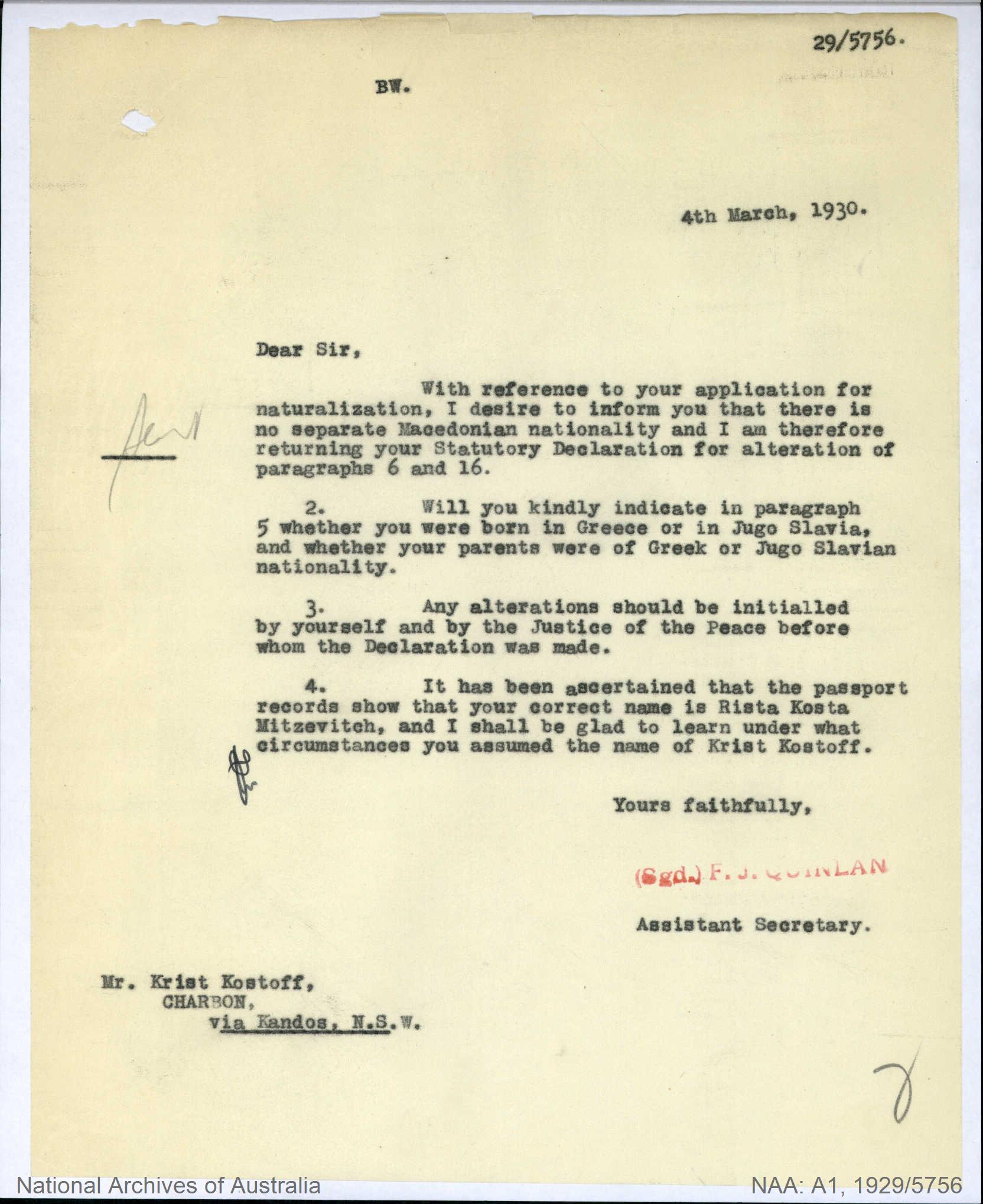