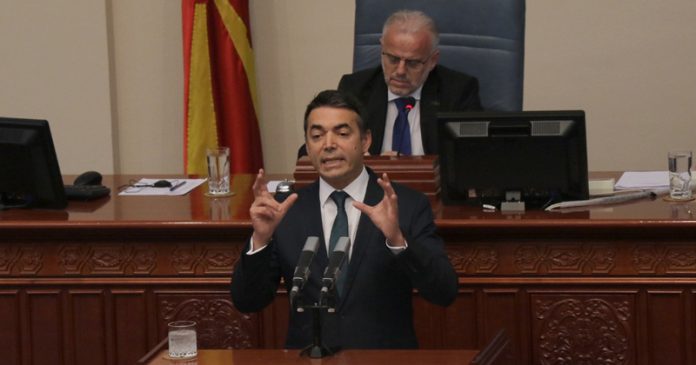 The February 3 motion for the interpellation of Deputy prime minister for European integrations Nikola Dimitrov was defeated by only two votes.

Following a 12-hour debate, 53 MPs voted for and 55 against a procedural questioning of the former foreign minister about the state of the negotiations with Bulgaria following the veto and the stalled integration process with the EU.

The session was marked by a heated debate and accusations from both sides of the isle. Levica MP Dimitar Apasiev gave a scathing 10-minute overview of Dimitrov’s diplomatic career, accusing the deputy prime minister of nepotism, corruption and of being a US spy.

Dimitrov was accused by the former foreign minister in the VMRO government, Antonijo Miloshoski, for withholding details of national importance from relevant institutions and the public. The biggest opposition party has called for Dimitrov’s resignation on multiple occasions and this was the third unsuccessful motion for his interpellation.

VMRO’s Timcho Mucunski said Dimitrov was responsible for the signing of ‘asymmetrical’ agreements with Greece and Bulgaria which negate the Macedonian identity. Dimitrov and the government where attacked for giving false confirmations that Macedonia is going to formally start negotiations with the EU once the agreements are signed.

Dimitrov dismissed the motion for his interpellation claiming it is based on a “collection of fake news” and insisted that he has defended the Macedonian language and identity. Dimitrov cited NATO membership as one of the most the achievements of the government and gave an assurance that the government is going to secure two of the most important matters – preserve the Macedonian identity and provide an European future.

To that, Antonijo Miloshoski reminded Dimitrov of the recent removal from official use of the adjective ‘Macedonian’ in the formulation “Macedonian commission” in the negotiations with Bulgaria, citing another example that the government has made concessions to Bulgaria for which the Macedonian nation hasn’t been informed.