Macedonian Orthodox Badnik – A Day of Observance and Inviting Wellbeing 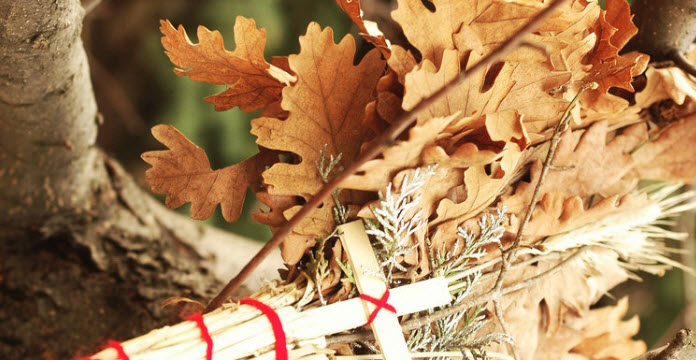 Orthodox Christians who celebrate holidays according to the Julian calendar are going to observe Badnik (Christmas Eve) and Christmas on January 6 and 7. This is one of the most important Christian holidays for the people of Macedonia and naturally so, it is marked by unique customs.

In Macedonia and other Christian Orthodox countries in the Balkans, the day of Badnik is marked by several communal activities. The day begins at dawn with children singing traditional songs while going door to door around the village asking for treats.

The day continues with the observance and participation in other important rituals that symbolize the change of seasons and are in the service of attracting good fortunes.

In some regions the family elder and in other regions the male members of each household went to harvest branches of oak or other trees. Regardless of the type of the tree, the branch is universally called Badnikovo Drvo, meaning Tree of Badnik. Today, households that are observant of Badnik and Christmas put up a Badnik branch on the entrance door or inside the home.

For dinner, a modest offering of peppers and garlic, baked beans, cabbage and other food free of animal products, is served along with wine. The most exciting part of this event, however, is the spinning of the pie or ‘pogacha’. Before the dinner commences, members of the family gather around the table where a pie concealing a silver coin is being spun in a circle, either by all of the family members holding it together at the same time or by the family elder.

The pie or ‘pogacha’ is divided in equal numbers, however, one piece is marked for the house and one piece for God. It is believed that the person who is lucky to receive the silver coin will be blessed by good luck in the year ahead. A more auspicious outcome is if the coin becomes attributed to the house or to God.

Following the family dinner, the Tree of Badnik is kindled along the edges. In some regions of the country, either the man or woman of the family walks around the house with the kindled branch in order to chase away the evil that may have entered the home.

The observation of Badnik is preceded by a communal making of a bonfire on the night of January 5. People gather around the fire to dance and sing, and some even jump across it. These activities essentially celebrate the life-giving properties of the sun and the coming of the spring season which, in contrast to the winter, is marked by warmth, the waking of nature and long days spent out in the fields and with the livestock.

Interestingly enough, the origin of the word Badnik is the Slavic word “bud” which has origins in the Sanskrit language and is cognate with the word for Buddha, symbolizing wakefulness. The choice of this word to describe the nature of Christmas Eve is not by coincidence.

On Christmas Eve, people are expected to be awake in the night and to be observant in silence. This resembles the birth of Jesus in the manger which was surrounded in silence and wakefulness, as the night was illuminated by the so-called Star of Bethelem.