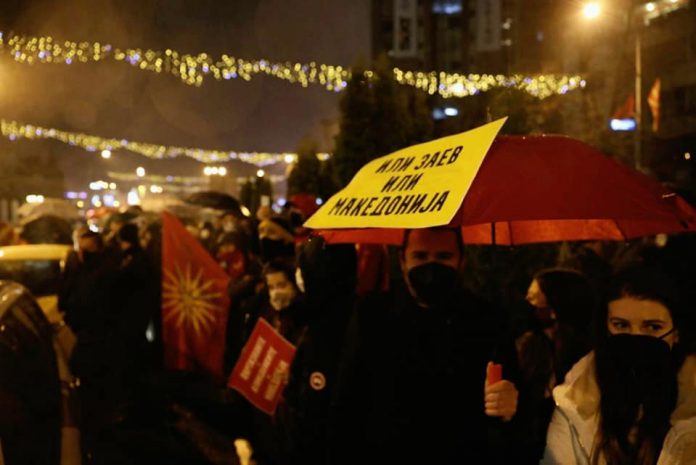 Failures to protect Macedonian identity, dealing with the covid crisis, diplomatic policy failures and an economy in rescission have brought together a united opposition determined to inspire a change of Government.

Calls for resignations have been echoing across the country with daily protests occurring for more than a week. With the path to EU membership now officially blocked by Bulgaria, the foreign policy that gave SDSM its supporter base is now in tatters.

The main opposition party VMRO-DPMNE along with Levica and minor parties have been holding protests in front of the government buildings in Skopje and multiple other locations in the country, mainly inspired by the possible selling out of the Macedonian history and nation in return for starting negotiations with the EU.

Hristijan Mitskovski, the leader of VMRO, addressed the public on December 8 calling for “everyone to stand united on the path of injustice, so that we can stop the selling of our identity, history and traditions.” Mitskovski invited people of various political affiliations to join the resistance.

The Christian conservative party Integra is one of the political parties that joined the call for a unified protest, as did the political party representing Macedonian leftist and socialists, Levica (The Left).

Integra, Levica and Voice for Macedonia have made calls for a united opposition against the SDSM-led government. Levica’s leader, Dimitar Apasiev, called for putting aside the political differences among the opposition parties in an effort to unite and “bring down Zoran Zaev’s satrap.”

The first wave of protests by VMRO members and other independent patriotic groups was triggered by the series of concerning reports coming from the ministerial meetings and working commissions between Macedonia and Bulgaria. However, the economic downturn and Bulgarian veto have resulted in a wave of dissatisfaction among the people.

Most companies in the garment-making industry have laid off workers or have been severely impacted by covid outbreaks, due to failed safety protocols. Tobacco growers have been protesting on multiple occasions in Prilep, Shtip and other towns because of a huge drop in the purchasing prices. The metalworking industry is facing losses as well, as are most other sectors.

The number of newly-registered unemployed has grown to more than 50,000 since January and according to the national statistics agency, half a million people are living with no more than 2 euro a day.