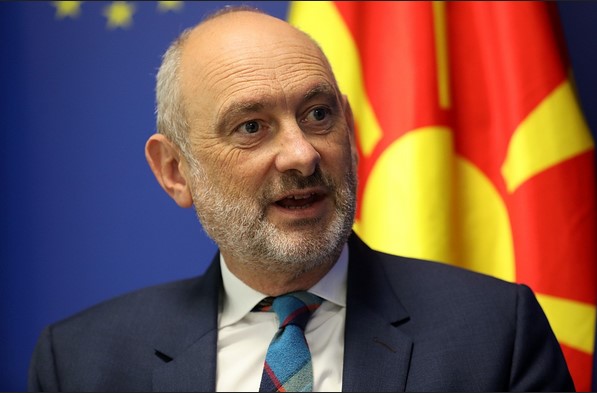 The European Union ambassador to Macedonia, David Geer, has stated that EU regulation coming into force in August will make it illegal for national ID cards to annotate the bearer’s religion, race or ethnicity.

The regulation goes against the agreement made between coalition partners SDSM and BESA from the Albanian bloc, at the request of the latter, to add the person’s ethnicity on state-issued identification cards.

If the government is to go ahead with the decision, Macedonia will become the only European country to have such information on ID cards and this will put it at odds with EU regulation.

Mr. Geer made this statement at the end of a conference today, marking Macedonia’s chairmanship of the Central European Free Trade Agreement CEFTA.

Following his meeting with Minister of Economy Kreshnik Bekteshi, the EU ambassador responded to a media question asking whether the changes that were announced in the Law on personal identification cards, which will enable individuals to list their ethnicity, is in line with EU regulative.

Geer stated it is important for Macedonian to adopt EU legislation, its rules and standards in order to make progress, as these matters are at the forefront of the membership negotiations.

“At the present, ID cards in EU countries are regulated by the issuing member states, however the regulation that I mentioned containing the first rules that are relevant to these documents at the EU level will come into force in August 2021,” stated Geer.

If Macedonia is to begin negotiations in 2021, the SDSM-DUI-BESA coalition will have a short time frame in which they can score nationalistic points from the Albanian voting body. The changes also open the door to Bulgaria which may request that Macedonians who also own a Bulgarian passport should be annotated as “Bulgarians” on the official state ID.