EU Parliamentarian Irena Joveva: What Bulgaria is doing to Macedonia is Anti-European 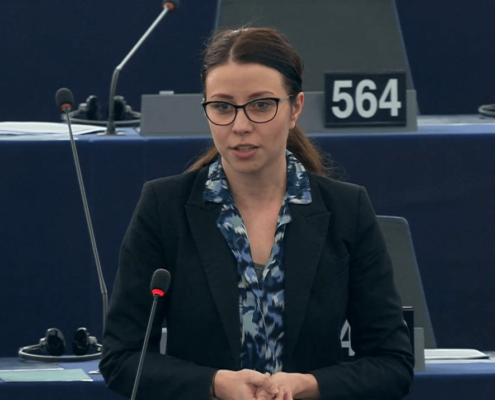 Slovenian Member of the European Parliament, Irena Joveva appeared on Macedonian national television yesterday with a scathing attack on Bulgaria’s blockade of Macedonia’s EU path.
Joveva belongs to the party Lista Marjana Sarca (Marijan Sarec List) which has 14 seats in the Slovenian Parliament and 2 in the EU Parliament. Irena Joveva is also of Macedonian origin.

We have translated her appearance for 24T – the part of the interview where Joveva speaks about the Bulgarian blockage to Macedonia.

Is there a resolution in sight of the Bulgarian blockade to Macedonia?

I don’t want empty promises and my profession is not to predict the future, but the fact is that this dispute arises from nationalistic, revisionist and unjustified tendencies on the part of Bulgaria.

This is part of the Bulgarian political campaign in the elections. They are betting on nationalism to win cheap political points.

Bulgaria has elevated its rhetoric, it has become more nationalistic. What about the matter of not recognizing the Macedonian identity and language – can we expect Bulgaria to soon start acting in a European way?

What Bulgaria is doing to Macedonia is shameful. I see it in disgust. Macedonia did everything it can to get to this point. Macedonia changed its name. How the country has to convince Bulgaria in something after Bulgaria made grand declarations it will help the countries of the Western Balkans on their EU path. By blocking Macedonia, Bulgaria is blocking the European way.

You shouldn’t need to trade your history and language. Macedonians should not suffer anymore. They deserve to live better. Bulgaria shouldn’t abuse its position. This leads to Euroscepticism. The blockade and the lack of dialog and the lack of basic respect for dialog will not solve anything. It will only make this worse.

Joveva, can Western pressure be expected in resolving this problem? Following the strong criticism from Czechia and Slovakia, Slovenia remained silent.

There has been pressure on Bulgaria, both formal and informal. 26 member states in the EU Parliament said Yes to negotiations with Macedonia. The problem is bilateral and issues like this can’t be used to block another country. This shouldn’t have been allowed. Bilateral issues can and should be solved outside the negotiations framework.

The EU wouldn’t have grown to 27 member states if all bilateral disputes were brought into the negotiations framework.

There is pressure and the question is when Bulgaria is going to let up. Lobbying is in the works both formally and informally. Bulgaria doesn’t have support for this blockade. When Slovenia takes over the EU presidency there will be focus on the Bulgaria Macedonia dispute.