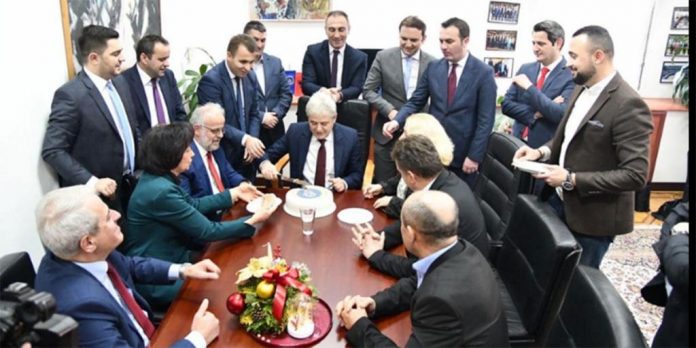 Aleksandar Mitovski, chief editor of the news portal Infomax, stated that he sees the main ethnic Albanian political party in Macedonia coming to an end.

In his appearance on Goran Momiroski’s talk show on Alfa TV, Mitoski voiced his perception of the possible changes in the Democratic Union for Integration (DUI) – led by Ali Ahmeti, the political commander of the Kosovo Liberation Army offshoot in the 2001 armed conflict in Macedonia.

Mitoski remarked upon DUI’s 20 years in government and its status of a “white bear” meaning, the party’s inexplicable enjoyment of special privilege from the legal system and institutions of the state.

The newsman underscored that there hasn’t been a single legal procedure or official investigation involving any of DUI’s figures, politicians, past ministers or mayors.

Mitovski reflected on a case that reached public infamy, when a police officer was verbally and physically attacked by a DUI party notable.

Within hours of the news, media reported that the statements regarding the event were changed. According to the updated narrative, the police officer had injured herself by accidentally by backing into a vehicle towing truck that was supposed to remove an illegally-parked vehicle of a DUI member.

Mitovski stated that Infomax journalists are blocked at every attempt to obtain documents from Government institutions (by the Freedom the of Information act) involving DUI politicians or companies owned by individuals involved with that party, that have won public and government tenders.

“There is little doubt that DUI, that is, its leadership, is facing an end. The party is split into fractions and there is word that high-ranking functionaries are headed for the International Court of Justice at the Hague.

We are going to find out about what DUI has been doing all this time.

They have been in power for 20 years. That is 20 years in the Government. Not a single party member has been implicated in a scandal, an investigation, a legal charge, no one has paid some kind of a fine” stated Mitovski.