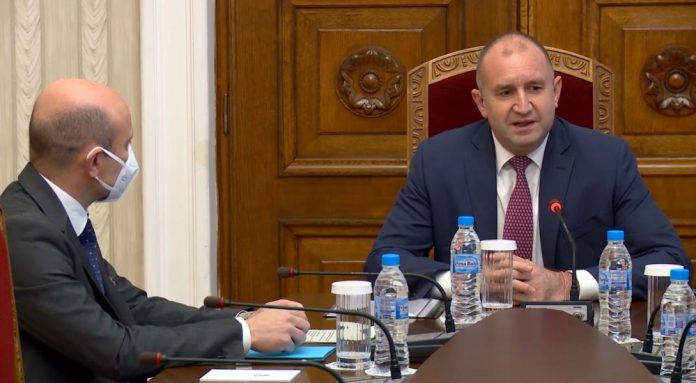 Bulgarian President Rumen Radev has called a meeting with heads of national security agencies in order to discuss their possible involvement in Macedonia to defend ‘Bulgarian human rights’.

The far-right Bitola-based organization is made up of a small group of Bulgarian nationalists who promote Sofia’s interest in absorbing Macedonians into the Bulgarian ethnogenesis.

The Center’s letter has stated that people with a Bulgarian consciousness in Macedonia are repressed and persecuted, which was enough for Radev to speculate for the possible involvement of his country’s security agencies in Macedonia.

The Macedonian President Stevo Pendarovski has called Radev’s remarks “meddling in the internal affairs of a sovereign country”.

The recently-appointed facilitator in the negotiations with Bulgaria, Vlado Buchkovski pointed out Radev is acting in service of the coming elections in Bulgaria where parties play heavily on the so-called “Macedonian question”.

As Bulgaria approaches Parliamentary and Presidential elections, politicians are using every opportunity to beat their chest over who is more radical in pushing Bulgarian far right interests in Macedonia.

Tito Petkovski, a long-term parliamentarian from the New Social Democratic Party says that Bulgaria is in a panic that the roughly 100,000 holders of a Bulgarian passport in the country are not going to declare themselves in the ethnicity on the upcoming population census.

However, as Bulgarian software is supposed to be used for the execution of the Macedonian census, Bulgaria has plenty of manoeuvrability to manipulate data.

Petkovski emphasizes that the Ivan Mihailov center in Bitola has promised those who will declare themselves as Bulgarians are going to receive a passport by a fast-track procedure, with the help of the Bulgarian government.

Facebook
Twitter
WhatsApp
Linkedin
Email
Previous articlePopulation census open to manipulation – Bulgarian IT companies have donated the software
Next article3 years ago 100,000 Macedonians around the world stood up for their human right to exist