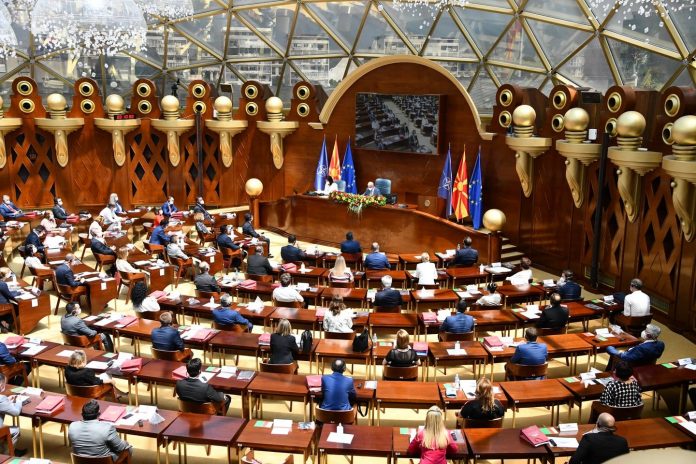 The SDSM/DUI government coalition’s attempt to bring a new legislative procedure into force without opposition MPs has resulted in the latter blocking the move with around 3000 amendments. According to VMRO-DPMNE and Levica, the amendments are a form of protest against suspicions that the government coalition is rushing to pass a procedure that would enable MPs to attend and vote remotely in online parliamentary sessions.

Parties from the opposition base their concern on the likelihood that SDSM/DUI MPs are going to vote for the inclusion of an Annex to the 2017 Macedonia-Bulgaria Agreement while the opposition is absent. Bulgaria is eager to supplement the Agreement with an Annex that sets dates and benchmarks for delivering on the provisions that are treated in official talks by the Macedonian and Bulgarian History and Education Commissions.

VMRO-DPMNE stated that their 1350 amendments are against the “illegal and unparliamentary” way in which the Government is behaving in recent time. Nikola Mitsevski who coordinates the VMRO-DPMNE parliamentary group, said that their participation in the Jean Monet process did not help the government to agree to bringing the new legislative procedure by a consensus.

Members of the opposition dismissed the Government’s accusations that the opposition is behaving “irresponsibly” by suggesting that then opposition SDSM blocked the parliamentary procedure in 2007 by submitting 5000 amendments.

The Macedonian society is divided over the amendments, which range from sensible to absurd. The latter have been reserved by Levica. Among their 1400 amendments are provisions that require MPs to wear pajamas if they are tending to their legislative duties from home past 20:00 o’clock or that the General Secretary of the Assembly has to provide each MP with an optical cable.

Levica President and MP Dimitar Apasiev explained the nature of their amendments with the words: “Since it’s a ball, let’s make it a maskenball.”

Apasiev called the new procedure “unconstitutional” and protested the government’s potential acceptance of Bulgaria’s heavy demands. According to him, SDSM and DUI want to “smuggle” updates into the legislative procedure in order to make it “easier to ratify a preemptively-concluded Quisling Annex-Agreement which is a total negation of the Macedonian language, nation and identity.”