Coach Igor Angelovski: Pandev loves Macedonia – would trade his trophies for success with the team 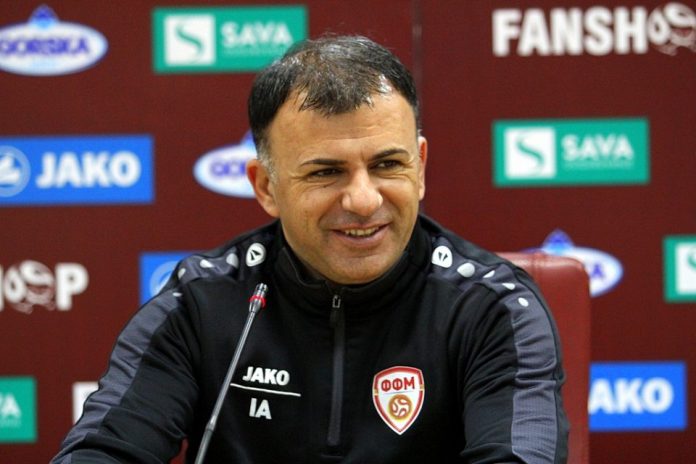 With less than three weeks until the start of the Euro 2020, coach Igor Angelovski appears in the news often to reflect on the national football team road to success and its attitude regarding Macedonia’s first-ever Euro Cup competition

Although Angelovski headed his former club Rabotnichki to winning the national league and national cup in the same year, he didn’t have substantial experience as a coach when he took over the Macedonian national team.

He earned his credentials as a capable leader by earning Rabotnichki much praise and success in the 2015 season when the club came up one win short of making it to the Europa Cup.

Relying on a domestic troop of footballers (collectively valued at 2.5 mil euro), Angelovski threw Trabzonspor (88 mil euro) out of the competition, even though Rabotnicki played with only 10 players since the 66th minute.

His next challenge was Russia’s Rubin Kazan (62.6 mil euro) against whom Rabotnicki lost only 2-1 on aggregate.

To be fair, Elif Elmas was indeed a protege of Angelovski’s in 2015, but back then he was too young to shine the way he can now and Rabotnichki’s success was purely a team effort.

Building team Macedonia with a vision

With the confidence he’d built by bringing out the best of Rabotnichki’s players, Angelovski stepped up to the task of reforming Macedonia’s national team during its worst season ever.

Macedonia had the lowest FIFA ranking in its history following the disastrous 2016 Euro Cup qualifiers – 166th place (March 2017). The national team recorded seven losses and finished last on the table, behind Luxemburg.

The atmosphere inside the team was so depressed that Macedonia’s best player, Goran Pandev, refused to play for two years.

When he was offered the job as Macedonia’s head coach, Angelovski first went to Genoa to talk to Goran Pandev. He promised the striker that he will build a professional environment around the team and nurture ambition for success.

Grande Pandev agreed to rejoin the team because, according to Angelovski, he has immense love for Macedonia.

Pandev told his new coach that he would trade all his trophies for a memorable campaign with the national team and keep in mind Pandev is the UEFA and FIFA club Champion with Inter, Italian Seria A Champion, Italian Cup winner with Lazio and the only striker born in the former Yugoslavia who has crossed the 100th goal mark.

With Pandev onboard, players who formed the backbone of the team and a few fresh faces pulled from the U21 team, Macedonia set off to accomplish what no one – except Angelovski – could imagine.

From worst to bad to better

Angelovski’s 2018 World Cup qualifiers didn’t start off as hoped. Macedonia lost to Albania away and to Israel at home.

Although the next game against Italy became his third loss, Macedonia’s boys showed little respect to the trophied Italians and held a lead of 2-1 – which they squandered in the last minutes of the game to lose 2-3.

The team’s performance, however, was promising. Some of the players brimmed with ambition and took initiative with the ball. But this didn’t prove to be enough because in the next gaim, Spain’s team of champions swept Macedonia 4-0. On the return leg in Skopje, the Spaniards had a tougher time, winning 2-1.

Nevertheless, Angelovski took note of what he needed to see and resumed working on the team.

In the last two games of the 2018 World Cup qualifiers, Macedonia defeated Israel 1-0 away and tied against Italy 1-1, in the last away game.

Macedonia finished second-to-last in the group, but the team improved on its chemistry to appear a lot more confident.

Better confidence and ambition in mind

The next qualifications cycle saw team Macedonia ready for the big challenge – realizing Angelovski’s goal of making it to the Euros.

During this qualifications cycle Angelovski gave more pitch time to the talented newcomers Elif Elmas and Enis Bardhi and showed the world that Pandev is like wine – the older he gets, the better he is.

Macedonia began its road to the 2020 Euros with a 1-1 tie against Slovenia away, in a game that was marked by particularly rough play on the part of the hosts.

In the next game in Skopje, Macedonia defeated Latvia 3-1. Although the guests were in the middle of a generational change, this win brought the team confidence and enabled Elif Elmas to stand apart with several gallant moves.

In the next home game, Macedonia faced Poland led by Lewandovski. The favoured Poles were kept in check by a Macedonian team that didn’t behave like the underdog.

Sadly, Poland took away the win only thanks to poor defending by Alioski who enabled Pjontek to score an unconvincing goal in the 47th. Poland defended from a formidable onslaught from Macedonia, but this didn’t result in a goal.

The next game against Austria was a reminder that team Macedonia must learn how to maintain consistency. Some of the players appeared disoriented and without any fighting spirit, enabling Austria to score 4 goals and concede one.

In the remainder of the qualifications cycle, Macedonia had to prove it is determined to play good football regardless of the losses.

The team gave Poland a tough time in the away game – conceding two goals in the last 15 minutes of the game. The second loss to Austria (2-1) was purely the result of a sleepwalking defence.

Three wins – against Latvia, Slovenia and Israel, helped the team reach its best position ever – third place, but it wasn’t enough to make it to the Euros through the group stage.

To make it to the Euros, Angelovski’s team had to make a seamless performance in the UEFA Nations League group and later in the play-offs.

One wins against Kosovo and one against Georgia which landed Macedonia in its first-ever Euro Cup.

It was unfortunate that Macedonia didn’t at least tie its final game of the new Nations League cycle against Armenia. Because of the loss (1-0), Macedonia can’t qualify for the play-offs for the next competition.

This loss can be blamed on the euphoria from qualifying in the 2020 Euros and it is justified that Angelovski had already begun preoccupying himself with that problem instead of the next potential entry.

Shocking win for the books

When it comes to the game of football, Macedonia is not even a regional force, like Serbia and Croatia. Its national league is unknown to international fans. Besides some bright moments here and there, only Vardar has made it to a European club competition – once in its history.

When a national team like Macedonia’s defeats a powerhouse like Germany (Macedonia has previously come very close to defeating England, Italy and the Netherlands), the world of football takes note and so does everyone at home.

Players in the domestic league learned how it is done and there is little doubt that thanks to Macedonia making it to the Euros, and perhaps even better – defeating Germany – every player will make a better effort in order to get his name out there.

If we can count on a logical progression of things, Angelovski and future coaches of the national teams (U21, U19, U16 included) should have an increasingly wider roster of potentials.

If the win against Germany represents the shape of things to come for Macedonia at the Euros, the Macedonian football team will be on par against any competitor.

Yes, competing at the Euros comes with the burden of at least not losing terribly – because the books peg Macedonia as one of the sure underdogs, but Angelovski has a different mentality which he transferred to his team: “We are going to advance the group stage!” said he in multiple interviews.

These are not the foolish words of a gambler but of someone who knows a thing or two about synergies and momentums. It appears that the Macedonian national team, against all odds, at this moment in time is in possession of both.

Facebook
Twitter
WhatsApp
Linkedin
Email
Previous articlePope Francis gets his own Macedonia Euro 2020 football shirt – inscribed in Cyrillic
Next articleSkopje mayor: Allow me and I will destroy Skopje 2014