Bloody Easter – a fierce shootout between the Komiti and Ottomans 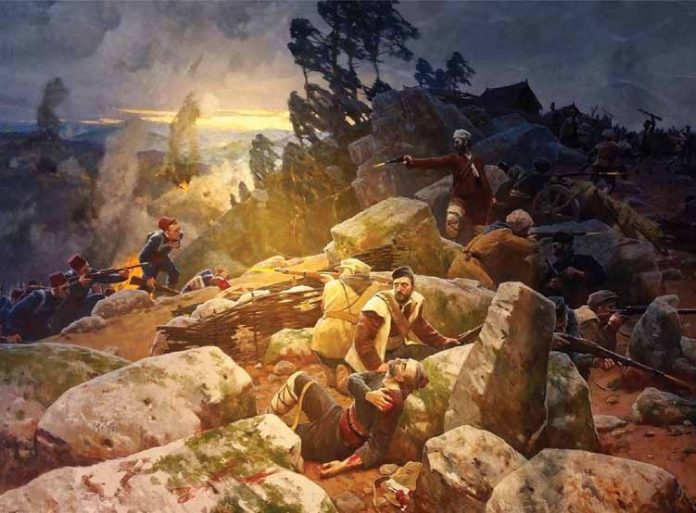 19 April marks the biggest battle between the Macedonian komiti (freedom fighters) and the Ottoman army prior to the Ilinden uprising in 190.

The event known as Bloody Easter or Gotensko Muarabe, took place between several bands of Macedonian komiti and a regiment of the Ottoman army.

What makes this battle unique is that for the first time, the Central and the Vrhoven (High) Committees of VMRO were part of a joined military action.

On the day of the battle, Ottoman units had discovered the location of a larger group of komiti in the Maleshevo region. The komiti repelled the attack but withdrew to the mountain Goten near Berovo.

The Turks created a band around the peak, but were surprised by units of komiti who came to the aid of their compatriots. Upon learning of the situation, the Ottomans from Berovo, Strumica and Radovish urgently dispatched additional army units.

This created several layers of battling Turks and Macedonians. Their respective units became sandwiched between the oncoming bands, resulting in a fierce and massive shootout.

According to historic accounts which have been relayed by Zvonko Skenderski, historian from Berovo, there were seven different bands of units that subsequently came from behind one another in succession.

The voidova Hristo Chernopeev stated in an account written down by Ljubomir Miletich (born in Shtip) that his cheta (regiment) was pushed out of Bulgaria by the authorities.

When they crossed the border they were joined by the cheta of Delcho Kocev, who guided them through the Osogovo mountain.

“We were 190 people when we started out, together with Delcho’s men. The men from Bitola headed to their region and we were down to 130. We took shelter near the village Leski on Plachkovica mountain.

A nearby asker (Ottoman army) had noticed our movement and they had called reinforcement from Vinica and Kochani. They cut off our way and we engaged in battle.

We pushed them out from two hills but they remained on the third, the tallest one. It was a long battle. We lost four men and one was wounded. We withdrew during the night,” says Chernopeev.

On the next day, the chetas led by Dechev and Maznejkov took one way and Chernopeev’s went through the Malesh region towards Strumica. They went hungry for three days. Upon reaching Vladimirovo in the Maleshevija region, the villagers gave them food.

Meanwhile, the Ottoman asker had attacked the other group, on Easter and Chernopeev went to their aid with 30 men, leaving the rest behind to watch their back.

The so-called Bloody Easter battle did not begin as a joint effort between the antagonistic Central and Vrhoven committees. It was the pro-Macedonian independence Central committee units that were attacked by the Turks.

The unit of Nikola Lefterov, a Vrhovist who wittingly or unwittingly did his group’s bidding for Bulgarian agents, only joined the battle because he was nearby and couldn’t resist extending a helping hand.

“Nearby was the cheta of Lefterov – he was a men of Ivan Tsonchev (Bulgarian army major and unofficial head of the antagonistic VMRO High Committee), but he came to our aid.

We hit the Turks from behind and freed our men. Lefterov’s regiment was split in two after losing 11 men. 30 men joined our band. We fought until nightfall, then we made an exit,” remarks Chernopeev.

According to Eftim Levenski who was part of Krsto Asenov’s group of komiti, Lefterov had given long thought before joining the battle. “Our men had tense encounters and even clashes with Koljo Lefterov, the ‘vrhovist’ and his men,” recounts Eftim Levenski in monographs from the Malesh region.

On the side of the Macedonian Central Committee were the units of voivodas Hristo Chernopeev from Dermanci, Kosta Maznejkov from Strumica, Delcho Kochov from Kochani, Nikola Dechev from Stara Zagora, Pitu Guli from Krushevo, Vancho Srbakot from Veles, Timo Angelov from Tikvesh, Kondov from Prilep, and others.

The battle was so remarkable that it was given the name Gotensko Muarabe – meaning, the Handshake of Goten, using the greeting word merhaba in Turkish – to mark the joined hand by the High (Vrhoven) Committee unit which was controlled by Bulgarian agents.

Accounts vary, but in the aftermath, the Ottoman army lost around 200 soldiers and the Macedonians lost 25 people from around 250-270 komiti. The remaining komitas were able to push through the Ottoman barricade and escape Goten.

Following the battle, Lefterov and his men departed for Bulgaria and Pitu Guli went to Krushevo. The voivoda Kosta Maznejkov died on May 11 with ten other komiti near the village Dedino in the Radovish region. This battle made it to the European newspapers because there were three women in Maznejkov’s unit – schoolteachers Ekaterina Ivanova, Elena Hristova and Zuica Kukutanova.

According to the historian Dr Violeta Achkovska, the battle on Goten (Bloody Easter or Gotensko Muarabe), inspired the creation of the Macedonian oro (folk dance) Ratevsko Muarabe which became incorporated in Maleshevko Oro which mimics the fierce conditions of the battle.