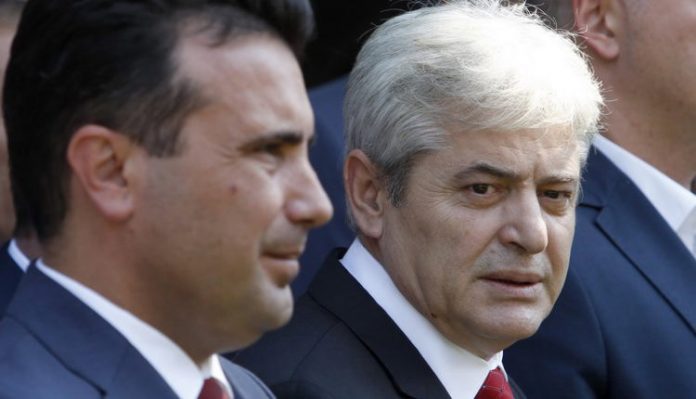 Ali Ahmeti, the leader of Macedonia’s junior coalition partner and ethnic Albanian party DUI, has revealed that talks have commenced to change the country’s flag, coat of arms, with the change of anthem being described as “a matter of time”.

“The anthem, the coat of arms and the flag are being discussed. These are issues that require consensus, but this will depend more on an agreement between the Macedonians. As for the anthem, it has been discussed and there is no opposition and it is more a matter of time and I think it can be discussed without reservations.” said Ahmeti during his interview on Klan Macedonia.

The revelation comes only weeks after the so called re-branding of DUI from a right wing nationalist party into a green party. During the re-branding Ahmeti claimed his party’s goals for ‘equality’ of Albanians was achieved and it was time for a green perspective.

“We believe that the state should focus with all its capacities on policies that bring development, economy and more money to the citizens. The government will continue on that path,” the statement said.

Since independence Macedonia has been under constant pressure from neighboring states to change the identity of the state and ethnic Macedonian people.

The Macedonian sun was removed as the state flag directly after a car bomb assassination attempt that almost took the life of then President Gligorov. Since then the same flag which is an ethnic symbol of Macedonians world wide has been essentially banned, along with the adjective “Macedonian” under the Zaev Government and in accordance with the illegally ratified Prespa Agreement with Greece.

Macedonia is now in talks with Bulgaria over ethnic Macedonian identity, with Bulgaria demanding history books in the country teach that Macedonians were in fact a Bulgarian people speaking the Bulgarian language.