Zaev meets with Macron in Paris: Your country deserves to start negotiations [Video] 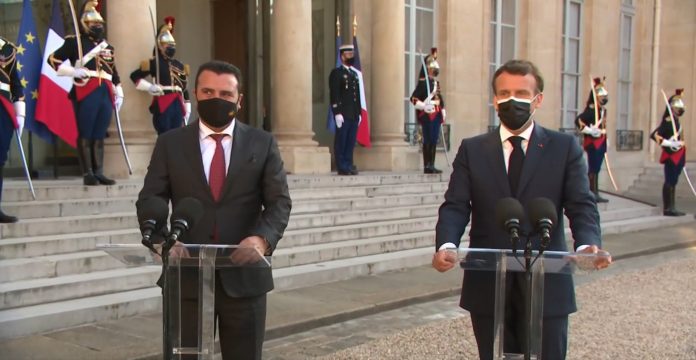 Macedonian Prime Minister Zoran Zaev and his top diplomats where in Paris for talks with French President Emanuel Macron this evening, with Macron now backing the start of Macedonia’s EU accession talks.

“Your country deserves to start negotiations without delay,” said the French President during a joint statement with Prime Minister Zaev.

“It is time to materialize this decision and we will work to find a solution to start negotiations.” said Macron.

Two years after France blocked Macedonia from opening EU accession talks in 2019, Macron is backing the start of the talks, which will put pressure on Bulgaria to lift its veto and allow Macedonia to commence EU negotiations.

Zaev thanked France for its support and expressed hope of the veto being lifted this month,
“From one of your statements to the students at the Sorbonne, that in Europe lies our identity and Europe gives us a future, I strongly believe that France can be the engine of EU enlargement to the Western Balkans. It is important for us that France supports this process based on the set criteria. The summit in June is a chance for our progress and to lift the veto.” said Zaev.

In the lead up to the failed referendum in 2018, Macron directly addressed Macedonian citizens and encouraged them to vote in favor of the name change.